Human personality classification. How, in principle, can one measure a complex and, in fact, unique human personality with a finite number of labels?  Ascribe a human to one of a few categories? If it seems impossible to solve such a task, the human brain copes with it with a hurrah. We, actually, from the first moments of familiarizing with a new person can already write him down as a family man or a bachelor, a spendthrift or a miser, a careerist or an eternal student. How does this happen? It turns out that our brain loves and is able to simplify everything it encounters. By criterion brain knowns only, in the first 8 seconds, we can determine very precisely the social status of a person, whether he or she is in a relationship, whether we can trust him or her, etc.[1] It is as if we are labeling a person.

The first impression, of course, is not always the most correct and can change over time. But still, if the brain classifies people so effectively, can we find a scientific or pseudoscientific approach? Mankind made a lot of attempts in the past: signs of the zodiac in astrology, types of personalities in , psychological archetypes of Carl Jung and many more. All these approaches are based on extracting a few features (descriptors) from a human and then giving its personality description based on these features.

In machine learning we also preprocess the original input data to transform it into some new space of features where we hope, the classification problem will be easier to solve. The main idea of this preprocessing is to reduce the variability of input data for each class. This makes it much easier for a subsequent classification algorithm to distinguish between the different classes. We call this preprocessing stage feature extraction. Note that new test data must be preprocessed using the same steps as the training data. [2]

Thus, astrology uses only one feature – the date of birth. The archetypes of Carl Jung – two binary features: whether a test person relies more on intuition or sensation, thinking or feeling. Of course, Jung’s features are much more advanced than the ‘date of birth’ feature for classification. However, the first truly scientific method of classifying a person was proposed by Hermann Rorschach in 1921.

Look at this image. So it could be? An evil monster? A couple of friendly bears? For almost a century, 10 such ink spots have been used as a kind of mystical personality test.

Developed at the beginning of the 20th century by psychologist Hermann Rorschach, the test is not really about the concrete things we see, but about our common approach to perception. As an amateur artist, Herman was fascinated by how visual perception varies from person to person. He transferred his passion for medicine and learned that our perception process not only registers sensory information but also transforms it. When he started working in a psychiatric hospital in Switzerland, he began to develop a series of bizarre paintings to gain a new understanding of this mysterious process. Using his ink-stained drawings, Rorschach began asking hundreds of people, the same question: “What can it be?”

However, for Rorschach was not really important what the subjects saw, but how they approached the task. What details of the image they were focusing on or ignoring. Whether they can see the movement on the cards. Did the color on some of the ink spots help to give a clearer answer or distract and crowd out the rest? Some people are inhibiting, giving the same answer for several spots, others give unusual and rich descriptions. The answers were as varied as the ink spots, offering different kinds of perception problems – some easier to interpret, others – harder.

Rorschach developed a system to encode people’s responses, reducing a wide range of interpretations to a few average numbers. These numbers could serve as ideal features for modern machine learning engines (such as DGM library). But that time Rorschach himself acted as such engine – he had the empirical data to quantify all the tested people.

The analysis of the general approach of the tested person gives a real understanding of his personality and sychology. And as Rorschach tested more and more people, the number of models increased. Healthy subjects with similar personalities often used surprisingly similar approaches. Patients with the same mental illness are also similar in their responses, making the test a reliable diagnostic tool. It can also diagnose some conditions that are difficult to determine by other available methods. [3] Thus, the Rorschach test was the first scientific method for human personality classification

The K-nearest neighbours classifier (KNN) is a type of instance-based learning, or lazy learning, where the function is only approximated locally and all computation is deferred until classification. Thus, the KNN approach is among the simplest of all discriminative approaches, but this classifier is still especially effective for low-dimensional feature spaces. However, the application of the KNN model in practical applications is problematic because of its low-speed performance for large datasets represented in high-dimensional feature spaces and for the large number of neighbors – K. In this article we address exactly this problem of the KNN model. 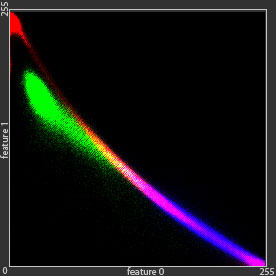 The original distributions of 160'000 samples from the dataset 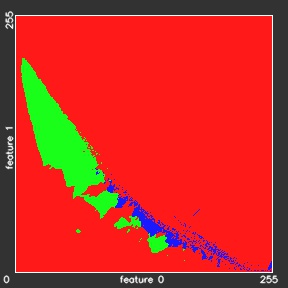 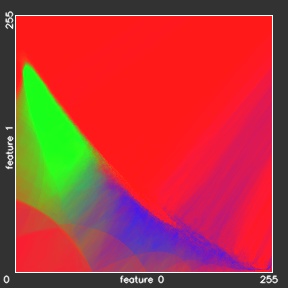 In order to estimate the potentials we consider the class of every neighbour as a vote for the most likely class of the observation. If the number of neighbours, having class l is Kl we can define the probability of the association potentials as: (see figure above, right)

It can be useful to assign weight to the contributions of the neighbors, so that the nearer neighbors contribute more to the average than the more distant ones. For example, a common weighting scheme consists in giving each neighbor a weight of 1 / r, where r is the distance to the neighbor. For our weighting scheme we modify this idea as follows: let r will be the Euclidean distance from the test sample to the nearest training sample in feature space and ri – Euclidean distance to every found neighbor. Then we can rewrite the previous equation with weighting coefficient:

where 1l means 1 if the class of the training sample is l and 0 otherwise.

The search algorithm aims usually to find exactly K nearest neighbors. However it may happen, that distant neighbors do not affect probability p(x = l|y) much. For example, the nearest neighbor with ri = r contributes value of 1 / K to the probability. And a neighbor, twice as distant from the testing sample (ri = 2r) will contribute only 1 / K(1 + r)2. For the optimization purpose we stop the search once the distance from the test sample to the next nearest neighbor exceeds 2r. Thus, only K’ ≤ K neighbors in area enclosed between two spheroids of radii r and 2r are considered (see figure below) and weighted according to the equation: p(x = l|y) = Kl / K’.

The neighbors are taken from a set of objects for which the class is known. This can be thought of as the training set for the algorithm, though no explicit training step is required. A peculiarity of the KNN algorithm is that it is sensitive to the local structure of the data.

Our implementation of the KNN model in DGM C++ library is based on the KD-tree data structure, which is used to store points in k-dimensional space. Leafs of the KD-tree store feature vectors with corresponding groundtruth and every such feature vector is stored in one and only one leaf. Tree nodes correspond to axis-oriented splits of the space. Each split divides space and dataset into two distinct parts. Subsequent splits from the root node to one of the leafs remove parts of the dataset until only small part of the dataset (a single feature vector) is left.

In order to evaluate the performance of our KNN model, we perform a number of experiments: 2r-KNN, 4r-KNN, 8r-KNN, 16r-KNN and 32r-KNN – models, where the nearest neighbors enclosed between two spheroids of radii r and 2r (4r, 8r, 16r and 32r respectively) are only taken into account. In the ∞r-KNN experiment all the K neighbors were considered. And finally the KNN experiment is the OpenCV implementation of KNN (CvKNN) based on linear search. The overall accuracies and the timings for all 7 experiments are given in table below:

Accuracies and timings for Intel® Core™ i7-4820K CPU with 3.70 GHz required for training on 1016 scenes and classification of 1 scene.

Our 2r-KNN model gives almost the same overall accuracies as the reference KNN model, but needs almost 5.5 times less time. The training time of the xr-KNN models, which includes the building of the KD-tree, takes 78 minutes, what is much more slower then 1,7 minutes for KNN training. However, the training in practical applications is performed only once and could be done offline, when the classification time is more critical for the whole classification engine performance. In the table above we can also observe almost linear increase of the classification time with increasing the outer spheroid radius to 4r, 8r, etc. Figure below shows the classification results for the experiments 2r-KNN – ∞r-KNN. 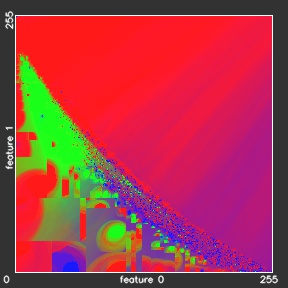 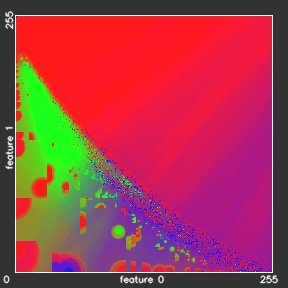 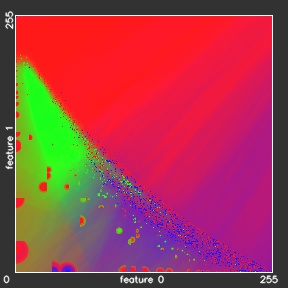 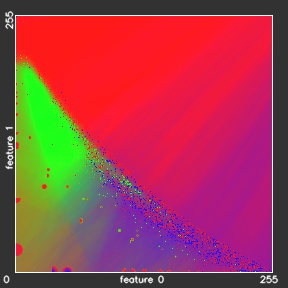 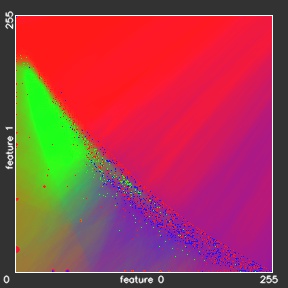 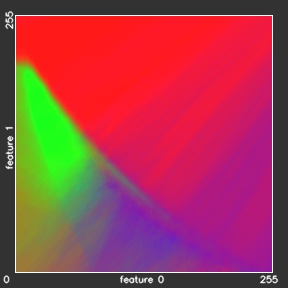 There is a wide variety of statistical models which may be applied to the semantic segmentation tasks. Let us now illustrate their impact on the computation of the label maps. For this purpose we use synthetic Green Field data-set, with 3 classes, described by two features. If we quantize all the features by 8 bit, we can map the whole data set to the 2-dimensional 256 x 256 feature space. If we accumulate the sample points in such representation, it will correspond to the probability densities. For the visualization we will mark these densities, belonging to different classes, with tree different colors: red, green and blue (see Figure below).

The original distributions of 160'000 samples from the dataset 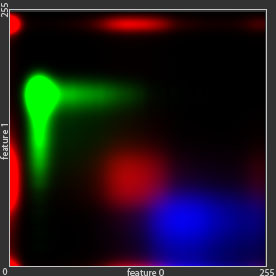 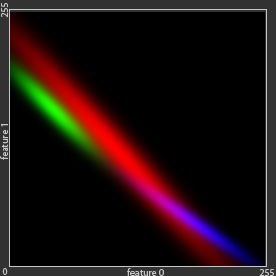 Gaussian Model: the distribution is approximated with a single Gaussian per class 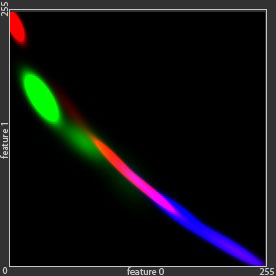 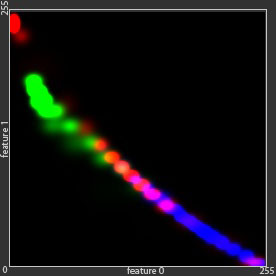 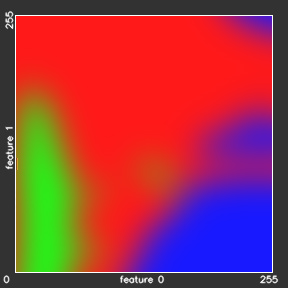 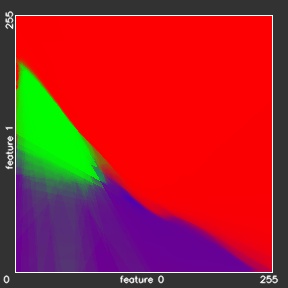 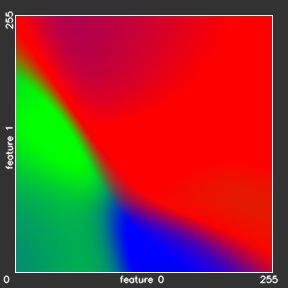 As we can observe from the Figure above, the generative models (Bayes and Gaussian mixtures) try to reproduce the original distributions. In order to do this precisely, a methods need to remember all the samples from the Green Field dataset – 160’000 parameters. Or, in general, restricting ourself to the 8-bit features, a method needs to remember k·256^m values, where k is the number of categories and m is the number of features. The main idea of the generative models is to rebuild the original distribution using much less parameters and therefore generalize the model for samples, that were not observed during training. Bayes model approximates the distribution using only k·256·m parameters, and the Gaussian mixture model — k·G·m·(m +1) parameters, where G is the number of Gaussians in the mixture. 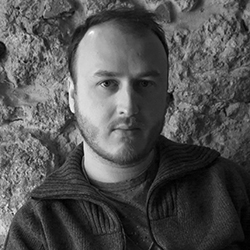